The impact of weather on construction productivity: the hidden cost

To kick things off

Through my role at EHAB, I have the privilege of speaking with people from across the world of construction. Heads of planning, estimators, site managers, people from risk teams, the list goes on. Because of this I have heard horror stories from every one of them about how weather has impacted or affected a project they worked on or managed. It’s universal. But when trying to dive deeper into what happened, the cause and the effect, well, the stories can start to get hazy.

People often refer to the lost weeks and months, the flooded sites and the attempts to claw back time through the contract, but rarely do we talk about the incremental losses. The hidden chipping away at the programme through slightly wetter or windier weeks and months than expected. Big events have big losses of time and complex knock on effects, but I’m always curious to learn about how or if productivity vs weather is measured.

As you can imagine, as the founder of EHAB (a company dedicated to solving the problem of weather risk in construction and making the industry resilient to climate change) I’m really curious about the details. About the hidden costs. The intangibles that have yet to be spotted for what they really are.

I believe, and the data we are starting to gather from the industry shows that weather is a huge hidden cost, and not something to be sniffed at. Today I want to dive a bit deeper into productivity and the incremental effects of weather. The most hidden of the hidden!

What sort of productivity impacts are there?

Having to use different equipment

In hot or cold temperatures equipment might slow down or even stop. This may mean switching to different equipment, which has a lower output, or having to stop value-add work to fix the equipment.

Whether from fog or dust the reduction in visibility can create reduction in productivity. Moderate amounts of either will force vehicles to move more slowly on site. If these events become more severe for a short time work may have to stop until visibility improves.

When temperatures drop there is lots of evidence to suggest that workers are less productive. This could be a combination of taking more breaks to warm up, wearing bulkier clothes and having less dexterity in hands and limbs.

Work may be prevented from happening during heavy snow or rain, but the aftermath of these events can also cause delay. Sites may need to clear snow from working areas or off materials. This might be easily compared to having waterlogged or flooded ground. In the best-case scenario, there is the ability and budget to pump water out of earthworks ditches. In many cases though the solution may simply be to wait.

Why is this still hidden?

When looking for research and papers into this topic you can quickly find an array of studies dating all the way back to 1966.

This first work was titled “The effect of adverse weather conditions on productivity on five building sites'' and the early data taken from these live projects in the UK seem to show that temperature and rain had negative consequences on house building operations.

Since that time there have been various other papers building on these concepts. More recently in 2017 researchers did a review of all previous studies to create a meta-analysis.

This did not contain a huge amount of data given there were noted problems in combining data from the various studies. After normalising the data, they did provide some initial conclusions. (More research definitely needs to be done!)

The data is not conclusive, but it’s not nothing.

A paper by Moselhi and Khan in 2012 used several advanced statistical analysis methods to dig into 10 months of data, examining different activity productivity rates as recorded by site teams and compared this to weather data on a daily basis.

The objective was to understand the relative importance of 9 parameters (4 of them weather related) on the productivity of an activity.

This work highlights that nearly half (44.5%) of the productivity of an activity can be influenced by weather. It also shows that temperature is the joint highest factor, alongside the type of work being undertaken.

This is an incredibly revealing statistic and one that should make all construction professionals consider the importance of weather on the outcome and cost of a project. As labour is likely the highest cost associated with a project, getting the most out of your workforce is paramount.

You can search around online for industry standard guides, but most contractors will also have their own data on production rates based on their workforce and jobs they have done. This is a step in the right direction because it means the rate is tailored to what has happened in the past. When it comes to weather however this creates an over reliance on historical data and single points of data rather than a curated data set.

The production rate is an average of rates, which when it comes to weather is baking in local effects of weather in ways that the contractor isn’t fully understanding. The variability of weather is infamous.

So, relying (accidentally) on non-local weather data when you need very specific information about weather at a very specific location, as you would if trying to create a production rate for a yet to be undertaken job, is a big mistake- that contractors don’t necessarily realise they are making.

Topography plays an enormous role in local weather. Wind is affected by any change in elevated surfaces, so especially in hilly or mountainous areas there can be considerable local wind effects.

Two valleys 1 mile apart may have hundreds of percent differences in average speeds, as one could have wind being funnelled into it and the other is protected by a mountain.

This points to the importance of location in the use of weather data.

Simply using the past impact of weather on productivity for similar projects in a nearby location will leave a large margin for error. 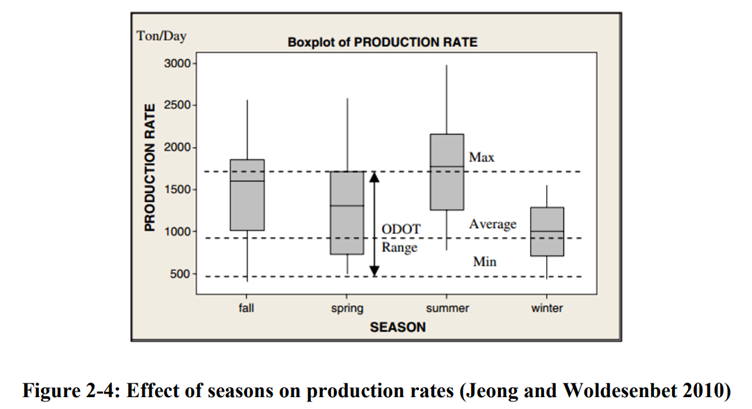 Given how variable weather can be over the seasons and as we’ve seen even within miles of each site location, the case has to be made for taking a bespoke approach to weather on every project.

That is the only way these hidden productivity losses can be accounted for. If you can account for these potential losses then you can price more accurately, take better steps to mitigate and ultimately get the best out of your workforce.

Moving from anecdotes to data

Anecdotally weather is seen as a huge concern. The research points to it being one of the major influences on the productivity of labour and plant.

This kind of cultural understanding of weather as a problem should make it a good candidate for digital transformation. It’s long been understood that communicating plans and handing over data more effectively results in large leaps in productivity (BIM).

So similarly, here, by explicitly measuring weather impacts and putting in place appropriate plans to deal with it can reduce its negative effects.

The problem is widely acknowledged as a concern for the industry, given the many horror stories I’ve heard. Now it’s time to count it, quantify it at every level of the industry and put in place processes that will reduce the cost and impact.

By doing this we can start to make improvements that will solve the problem as it exists today and place the industry in good stead as weather becomes the most important risk through climatic changes. (More on that subject later)

Top 9 Ways to Be Protected Against Weather Risk in Construction

Adverse Weather Plan: How to Keep Your Project on Track